Sometimes while I am up to my eyeballs, literally most of the time, I take a break. Where does this usually take me? Well, other than the local coffee shops, I like to take a wander around the charity shops.

Normally I can find the odd bargain or two and other times, I find something that goes on my wish list and it takes all of my willpower to not just hand over the money and claim it as my own.

On one particular occasion I discovered a little red suitcase. It was there in the window of a charity shop on the Steep Hill in Lincoln but was not for sale yet, as it was part of their window display. However, because I wanted it so bad I popped my name down for them to contact me once it was available. Why? I mean, it was just an old suitcase, I rarely travel so what was the point? 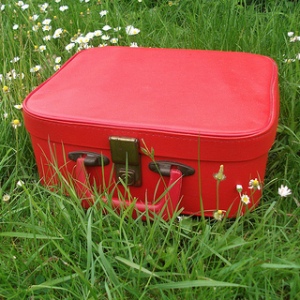 picture borrowed from (https://www.flickr.com/photos/woolgenie/7662451110/) who is also lucky enough to have one.

The point was that it reminded me of my childhood. It was identical to the one I had owned as a small child. It had traveled to London with me to visit my grandparents. It had held my dance costumes when I attended shows around the country. But to me it was worth far more than the £20 I paid for it. I almost wished for it to have been my old one and have my name written inside when I opened it. It didn’t but that didn’t matter.

So on my last visit to Lincoln I found this…

an old typewriter! Now my typewriter that I had learned to type on as a child, was cream and this one was blue. But strangely it was very similar to mine and the one I added to this website when I first started it.

My point is this… I didn’t buy it as it was £30, of which I did not have. However, I know that soon enough I will find one at the right time, in the right place, when I have the money to purchase it and it will become a part of my world, as it was all those years ago when I wrote my first little stories.

For now I will ring my parents and see if they still have mine.

Have a brilliant week and allow yourself time to daydream and reminisce. x

I believe that everything happens for a reason. Picking up any spare paper and scribbling random sentences as a child led to me typing them up on a child-size type-writer. I think I imagined myself a bit of a Miss Marple! The idea of sitting at my desk, watching the world go past the window, as I typed away was my dream.

So here I sit many years later with my laptop and notepad, watching the seasons change across the Cambridgeshire farmland and I know that I am exactly where I dreamed I would be.

Strange as it might seem, when your dream becomes a reality all of a sudden it is terrifying. Don’t ask me how this works, as even after years of studying Sociology and Psychology. I do not know. Technically, when you get to the point in life where you are living the dream it holds a sense of trepidation.

More comfortable, I found, was to sit at my desk at work, staring out of the window wishing I was home writing. There are no expectations to succeed on your own merit; just to complete your work. Yet being a writer you feel alone in the world of millions. If what you write is not deemed good enough, you have no manager to hand over to or tell you off.

Yet all that said, I love it! I am lucky to have been laid off from my mind-numbing job and left to write for my supper (or my children’s). Sometimes being forced to do something unexpected you find you work harder.

So the new book is well underway. I am working longer hours and more tired. But ultimately I am happy and content in my choice to embark on a full-time writing career. Please wish me luck and I hope you enjoy my books.